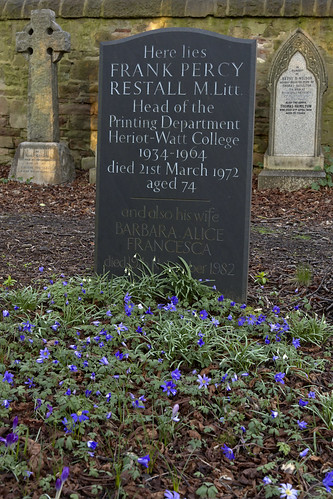 Typographer and Head of Printing at Heriot-Watt College 1934-1964

This beautiful headstone is notable for its exceptional typography. The Goudy font was used for his name and details and the High Tower font for those of his wife who died in 1982.

Frank Percy Restall was the Head of Printing at Heriot-Watt College from 1934 until his retirement in 1964. He wrote an essay on the printing of illustrations with special reference to the work of Edward Johnston, with typographical notes by Harry Carter. This essay appears in the three-volume catalogue of the Edward Clark collection privately printed for Heriot Watt College of Commerce and Technology by R & R Clark Ltd of Edinburgh in 1976-80.

Edward Johnston (1872-1944) was a renowned figure in British design. His influence on British printing through his calligraphy and type design is well documented, and Edinburgh Napier University Library holds a fine representative collection of books by and about Johnston and his pupil, the famous Eric Gill.