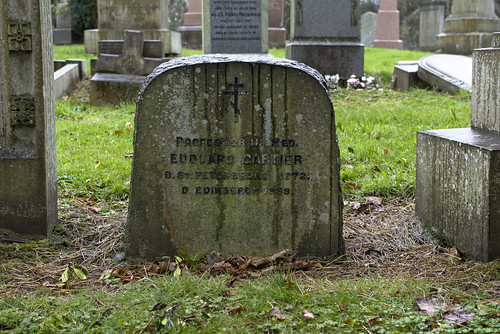 This unusual stone, distinguished by its Russian Orthodox cross, tells a remarkable story. Eduard Gartier, born in Pernau (now in Estonia), arrived at this final resting place after passing through some of the great upheavals of the 20th century.

Early in the 19th century Gartier’s grandfather moved from Westphalia in Germany to Estonia, then part of the Russian empire. The family developed business interests in St Petersburg and it was there that Eduard Eduardovich grew up and trained as a paediatrician. In 1921, amid the violence and famine that followed the Russian Revolution, he was allowed to emigrate to newly independent Estonia and was then head-hunted as Professor of Paediatrics at Riga in Latvia. As it migrated across borders and languages the family name changed from Hartje/Hartge to Gart’e and finally to Gartier.

At the start of the Second World War Latvia was invaded first by the Russians, then by the Germans. Having narrowly escaped liquidation by the Russian secret police the first time round, Gartier and his family fled the advancing Red Army in 1944. After three difficult years in post-war Germany family members managed to bring him, his daughter and granddaughter to safety in Edinburgh. He spent his final years in Spence Street and his granddaughter remembers happy walks with him in Newington cemetery. Following his odyssey he is revered as a medical pioneer in Latvia and fondly remembered by family in Edinburgh.

The cross adds a neat touch of symbolism. Gartier himself was a lifelong Lutheran but his wife and daughters had links with the Russian Orthodox Church and an Orthodox priest helped to care for him towards the end.