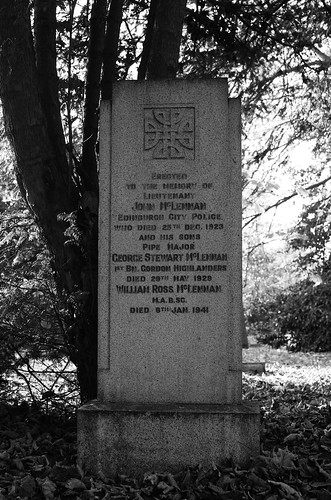 Pipe Major of the Gordon Highlanders, a leading piper and composer of ever-popular tunes.

In the musical world of his day Pipe Major George Stewart McLennan was a rock star.

After his death in Aberdeen in 1929 his body was brought by train to Edinburgh to be buried in Newington alongside his father (also a noted piper and a Lieutenant in the Edinburgh city police). In Aberdeen 20,000 people lined the streets to pay tribute to his cortege and the mourners in Edinburgh were led by William Robertson VC, Colonel of his old regiment.

A child prodigy, McLennan performed for Queen Victoria at the age of ten and he was appointed Pipe Major of the Gordons at twenty-one. Despite lifelong ill health he served in France during the First World War, where his spare time in the trenches was spent making bagpipe reeds.

During his lifetime McLennan gained fame both as a performer and a composer. Since his death his reputation has remained high in the piping world and has spread into new realms through the growth of folk music and fusion. Tunes like ‘The little cascade’ now reach the ears of new audiences, sometimes in arrangements that would raise the eyebrows of a piping purist.