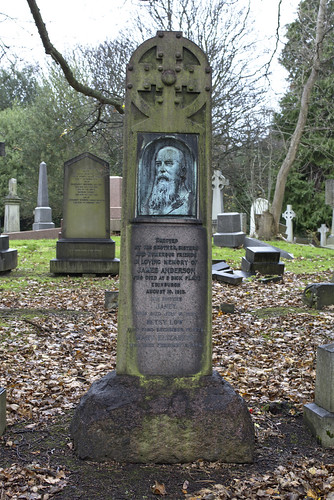 Featured for its sculptured medallion by John Stevenson Rhind

James Anderson of 9 Dick Place, Edinburgh, is recorded on his death certificate as "agent for wholesale soft goods merchant" and as "single". So far we have found no other information about him but his impressive grave suggests he was a prosperous and popular man.

Rhind received his first art training from his father and from 1882 to 1886 was a student at the R.S.A. Schools where he received several awards. Rhind specialized in portrait sculpture and received two important public commissions, the Edinburgh statues of Queen Victoria (1907) and Edward VII (1914). In addition to the bronze relief sculpture portrait of James Anderson here in Newington, other bronze medallions can be found in Portobello Cemetery (Andrew Balfour, 1907) and Dean Cemetery (Thomas Stuart Burnett, 1888). There is also a stone relief sculpture by him in Grange Cemetery (Edward Joseph Hannan, 1891). His cousin William Birnie Rhind is particularly well known in Edinburgh, as he sculpted the Royal Scots Greys memorial on Princes Street, the Black Watch sculpture on the Mound, and the Kings Own Scottish Borderers on North Bridge (all commemorating the Boer War).