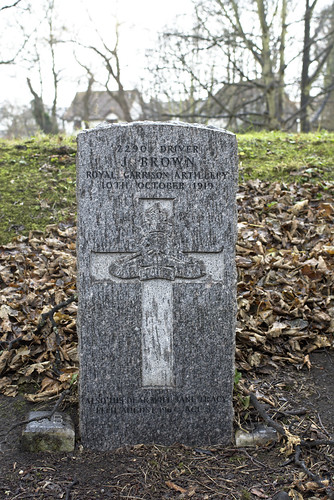 This account of the life and death of James Brown shows how one family was affected by WW1. James Brown's grave is just one out of 75 in this cemetery marked by individual headstones erected and maintained by the Commonwealth War Graves Commission. A further 67 names of the war dead are inscribed on the nearby Screen Wall.

James Brown was born at 118 Kirkgate, Leith on 29th July 1879, the son of Peter Brown, a specialist bootmaker, and his wife Mary (Lamb). James and his siblings were all encouraged to play musical instruments. He proved to be a natural musician, showing early promise and great ability on the melodeon (button accordion) and winning prizes as a boy for his playing. On leaving school he started work as a painter, decorator and general handyman but he was already well known enough locally to supplement his income by playing music.

On 30th December 1899 James married Jane Tracey, his usual residence being given as 5 South College Street, Edinburgh and his profession as house painter.

James was able to benefit when commercial recorded music took off. He first recorded in London in January 1909 for the Zonophone Company on 78rpm discs. In April 1911 he signed a contract with Zonophone, which guaranteed him £1.5.0d per side with a minimum of £30 per year. He was also paid £5 expenses from Edinburgh to the London studios. His records sold in sufficient quantities to warrant renegotiating his contract for the following year at increased rates. But there was seemingly no guaranteed minimum so November 1912 was to be his final session with that company. At his session in May 1911 he first recorded Little Pet Polka, later popularised by Jimmy Shand as The Bluebell Polka and selling a million copies for Parlophone.

Celebrity endorsement is nothing new. An advertisement for Campbell's melodeons published in the Sunday Circle Yearbook for 1910 describes him as Professor Brown, the Champion Melodeon Player of Great Britain. James no doubt received a fee for his endorsement, in words probably written by a professional copy writer: CAMPBELL'S Patent Melodeons are the Finest Instruments that have ever come under my touch, and only require a trial to advertise themselves.

James continued to record melodeon music for other companies and sometime around 1913 he hired premises and opened a dance hall in Picardy Place for six nights a week (of course not Sundays). He provided the melodeon music, accompanied by piano, and also toured the halls until 1915 when he joined the Royal Field Artillery and was sent to France, where he was badly gassed in 1916. His military service records, along with many others, are lost, destroyed by an incendiary bomb during an air raid on London in September 1940. An article published in 1918 in the Edison Bell Winner Company’s house journal The Sound Wave tells us a little about James’s service:

From 1913 to 1915 he toured the halls, until he joined the R.F.A. and became practically the band of his unit, played at all its marches, and later, when in France, supplied its church music, and played the Gloucester Bantams from our gun position into the trenches in June 1916, whence in August, same year, through suffering from gas, he was sent to Blighty. Then apparently well enough, he was transferred to the Entertainment Company, but being discovered not wholly cured, he was discharged unfit for military duties in December 1917. He is now back in Edinburgh playing around the East of Scotland, and added to this has been engaged to make Winner Records for all the world.

Surviving photographs show James playing in uniform and in a family group with the latest addition to his family.

James died in Edinburgh Royal Infirmary on October 10th 1919 aged 40, of what the death certificate records as broncho-pneumonia and cardiac failure. The Edinburgh Evening News of 20th October 1919 reported:

The funeral took place, with military honours, yesterday to Newington Cemetery, Edinburgh, of Mr Brown, well-known in local Concert Hall circles. Mr Brown served in France with the Royal Field Artillery, and he was badly gassed, from the effects of which he never fully recovered. The band of the Royal Scots, and the brass and pipe bands of the ‘Comrades of the Great War’ attended the funeral.

When James died his wife Jane was pregnant with their 10th child. She was described by a grandson as a real character and a tough old soul. She stayed on in the family home on the second floor of 28 Salisbury Street, which was demolished around 1961 to make way for the present Dumbiedykes estate. She herself for a time ran a dance hall which featured a band led by one of her sons and with a daughter as singer and dancer.

James Brown's headstone in Section B1 of the cemetery describes him as Driver in the Royal Garrison Artillery, a Lowland Depot of which he was probably transferred to prior to his medical discharge. The base of the headstone is further inscribed:

Also his dear wife Jane Tracy 14th August 1967 age 87. (Most records give Jane's surname as Tracey so the spelling here may be a mistake.)

We are indebted to James Brown's great grand-daughter Angela Miles of Colchester, Essex, for this information and much more. The abbreviated account of James's musical career comes from a biography put together some years ago by Keith Chandler from which some extracts are gratefully quoted. The LP record Melodeon Greats, issued in 1978, includes some of James's recordings.

Additional research by Tony Harris including data from the Scotland's People online archive.