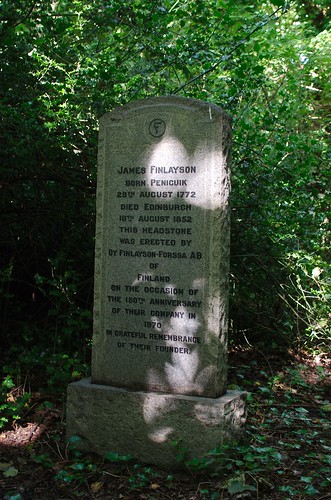 Founder of a major industry in Tampere, the second city of Finland

Finlayson was born in Penicuik on 29th August 1772, the son of James Finlayson, tailor, and his wife Margaret McLairin. Penicuik was then a small paper making community and the first cotton mill was established there in 1778. James probably starting working there at an early age, acquiring a knowledge of mill machinery. This led to work as a mill engineer in the west of Scotland where on 1st December 1792 he married Margaret Wilkie in Paisley.

Around 1800, through contacts with other Scottish engineers and Quakers, he became the master machinist in the Kolpino Workshops, St Petersburg, where he stayed for about 20 years, building up the textile industry and becoming known to the Czar Alexander I. In 1820 he moved to Finland, then part of Russia. In Tampere, then a small village, he saw the potential for waterpower and decided to establish a mill, aided by a loan, duty free concessions and land from the Czar.

In 1828 Finlayson opened a cotton factory which by 1845 employed over 500 workers. Before then however the enterprise struggled due to repression after the Czar’s sudden death, famine and other natural disasters. During this time James and Margaret helped many in Tampere by providing work, food or land. In 1836, broken in health and fortune, he sold out and returned to Scotland, settling first in Govan and then in Edinburgh where he died at 8 Nicolson Square on 18th August 1852. He and his wife had no children.

With more investment Finlayson & Co expanded, building workers’ homes and other facilities, and Tampere developed into the second city of Finland. In 1970 the company erected a headstone on James’s unmarked grave in Newington Cemetery and in 1988 Edinburgh’s Lord Provost unveiled a plaque to him on 24 Nicolson Square (formerly number 8).

Through several changes of ownership Finlayson & Co Oy still trades under the family name in Finland, Russia and throughout the Baltic.