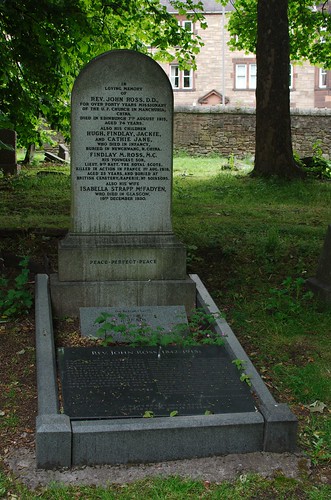 The Rev Dr John Ross, United Presbyterian China Missionary, is revered by millions of Koreans for the translation of the New Testament into Korean, and his grave is the most frequently visited one in Newington Cemetery.

John Ross was born in Rarichie, Ross and Cromarty, to Hugh Ross (a tailor) and his wife Catherine Sutherland (a teacher). A native Gaelic speaker, he had a gift for languages, and after working for three years in churches in the Highlands, decided to apply to the United Presbyterian Church’s Foreign Mission Committee to serve in China. He travelled there in 1872, with his wife Mary Ann Stewart, whom he had married in March that year. Almost immediately he moved to Manchuria, where from 1873-1905 he established and developed a thriving Christian community. This was supported and developed by theological training for local converts, putting into practice his principles of self-reliance, self-propagation, and self-government.

In 1874, he realised the possibilities of Christian mission in the adjacent hermit kingdom of Korea. As foreigners were barred from Korea, he persuaded Korean visitors to Manchuria to be his first teachers in the Korean language, and produced a primer in 1877 and a grammar in 1882. Most significantly for the development of Christianity in Korea, he also organised and supervised the first Korean translation of the New Testament, a work which took ten years and was finally finished in 1886. Ross chose to translate the Bible into the language which most people understood, rather than Chinese, which was spoken only by the educated classes, so that it would be accessible to all. Nevertheless, his work was infused by deep respect for Chinese culture and history, on which he wrote many books. His wife, Mary, died following the birth of their son in 1873. He married again in February 1881, Isabella Strapp McFadyen, in Glasgow during a return to Scotland on leave. He retired from China in 1910 because of ill health, and lived mainly in Edinburgh at 12 Marchhall Crescent. He remained active in ecumenical work and became an Elder in Mayfield United Free Church (now Mayfield Salisbury).