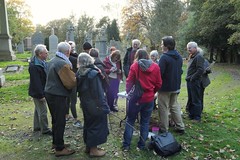 On the afternoon of Sunday 21st October Cemetery ‘Friends’ and others gathered for a walk around the cemetery. We were out to find species of fungi and were guided by the mycologist Patrick Hickey. The group fanned out over the 14 acres of the cemetery to find examples. These were brought back to a table where we had a closer look at them and heard what Patrick had to tell us of their biology and ecology.

We were intrigued to find many species from the very noticeable large bracket-forming species down to those fungi which lift their tiny fruiting bodies only a few centimetres above the ground. These latter species may become hidden in the leaf litter and on the underside of lying rotting wood so they need to be looked for and handled with care.

Here are a few of the species we found that afternoon.

The fruiting bodies of this species are commonly known as Dead Man’s Fingers. It is found in woodland upon decaying wood. It acts as a decomposer of organic matter. The fungus is on a subdivision of the Ascomycetes called the Pyrenomycetes, from the Greek πυρἠν - 'the stone of a fruit' - because of the usually somewhat tough texture of their tissue.

Commonly known as a 'Blue Wood' fungus this species colours its host wood it colonizes. Blue infected wood was once highly prized for marquetry in specialist furniture design, often known as Tunbridge ware. The fungus' tiny blue cup shaped fruiting bodies are relatively easy to spot. The fungi are in a division called the Ascomycetes which shoot their spores from microscopic spore guns called "asci".

Mycena genus The species of fungus within this decay-processing genus produces elegant capped fruiting bodies rising a few centimetres above ground. Some Mycena species are bio-luminescent . This quality increases the attraction for insects which then disperse the spores.

These bracket forming fungi have no gills. Their spores are released from pores/tubes/holes situated on the underside of the fruiting body.

This fungus forms fruiting bodies as brackets on hardwoods such as oak and beech. The fungus causes white rot in the host wood which may persist for years. 'Ganoderma applanatum' is also known as the Artist's Fungus: one can draw on the underside of the fruiting body due to a bruising reaction. After a few days the markings gradually fade away. 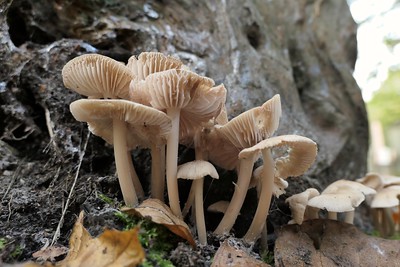 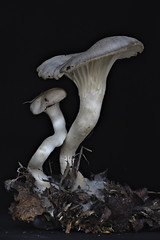 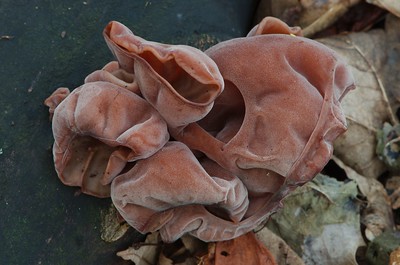