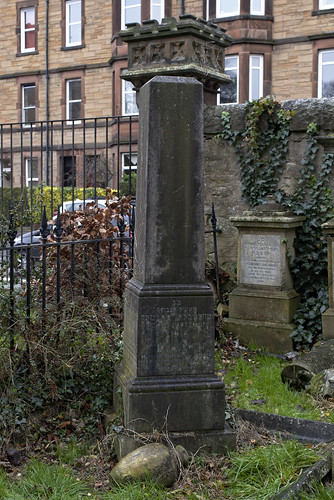 Alice and Frederic Salomon, brother and sister, died just three years apart. They are buried in the first two plots of the cemetery's Jewish section, although they were not the first burials.

Alice and Frederic occupy the first plots in the Jewish section because, in 1866, their mother Clara raised the money to purchase the site when the old Jewish cemetery at Sciennes House Place became full. She received donations from all over the UK, and the total cost of the grounds, walls, railings and gate was around 350 guineas. She then presented it to the local Jewish community.

Alice and Frederic's mother was Clara Jacob, who was born in Nancy, France, in 1819. She met and married Henry Salomon in France and they moved to Edinburgh in 1840, where Henry set up business as a bootmaker and wholesaler.

Clara was a corsetiere, known professionally as Madame Salomon. Her business must have prospered because by the 1860s she was placing enticing advertisements in The Scotsman inviting patrons to visit her showroom at 63 George Street to view her latest Paris purchases of imperial corsets, best kid gloves and rich satin boots and shoes.

The Salomons had eight children: Henry, Antoinette, Frederic, Isabella, Georgina, Alice, Adolph and Henrietta. The Salomon boys worked for their father and Frederic was a bootmaker's assistant. In 1873 he died, aged 20, of pulmonary consumption (tuberculosis) in a house on Canaan Lane in Morningside. Young adults were particularly vulnerable to TB which had no known cure.

It is probable that Frederic's sisters helped nurse him. His younger sister Alice was only 17 when she died of the same disease in 1876 at the family's home in Nelson Street. Her death certificate cites an acute final illness of 10 days, but she would have been ill for some time. Her brother Adolph witnessed her death. Their older sister Antoinette also died from TB in 1878.

It was about this time that physicians proved that TB was contagious, spread through coughing and spitting. It would be another decade until the world's first TB dispensary was opened by Dr Robert Philip, in Bank Street just off the Royal Mile.

Alice and Frederic's headstones were topped with a broken column, signifying a life cut short. There was a small, carved wreath on Alice's column, symbolizing victory in death. The family would have sat shiva for the children – seven days of deep mourning.

Clara died in 1889, aged 70. Henry died at the age of 84 at Castle Terrace, the home of his eldest son Henry who had taken over his father's business. They are also buried here.