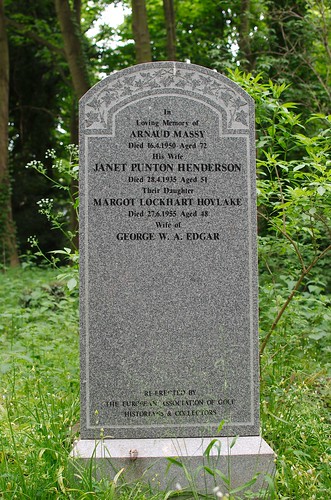 Frenchman Arnaud Massy was the first non-British player to win The Open, in 1907.

He was so delighted with his victory at Royal Liverpool, by two shots, that he named his daughter Hoylake after the venue of his triumph. In 1911 he tied with Harry Vardon at Royal St George’s, but lost the playoff on the 35th green.

Born at Biarritz in 1877, he was a prolific winner in his home country and also captured the Belgian and Spanish Open titles. He had honed his golfing skills in North Berwick, where he met and married Janet Henderson.

It had been thought that he had been buried in Étretat when he died in 1950, but investigations begun in 2006 established that Massy was in fact buried in Newington Cemetery. His body had been transported across the channel by his daughter, Margot Hoylake Massy.

The combined efforts and fund raising of the French Golf Federation, the European Association of Golf Historians & Collectors, local historian Douglas Seaton, and a number of others resulted in recognition of Massy’s achievements and local ties. A ceremony to honour him was held in Newington Cemetery on 23 February 2013.