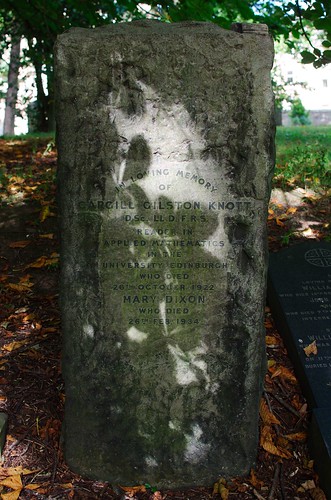 The splendidly named Cargill Gilston Knott was born in Penicuik and died in Edinburgh. His career highlights are summed up on his gravestone – Fellow of the Royal Society and Reader in Applied Mathematics at Edinburgh University.

He was the founding chairman of Edinburgh Mathematical Society, made important contributions in the field of quaternion algebra and ended his life as General Secretary of the Royal Society of Edinburgh. In short, he was a member of Edinburgh’s intellectual elite. But this summary conceals an exotic excursion. In the 1880s, following its enforced opening to the wider world, Japan was keen to draw on western expertise in its headlong rush towards modernisation. Thus, at the age of 27, Knott came to be appointed Professor of Physics and Engineering at Tokyo Imperial University. In order to expand its commerce Japan needed to construct a network of lighthouses, a challenging project in an earthquake zone. Attempting to identify suitable sites by quantifying the risk of earthquakes Knott began to study the mathematics of wave transmission across the boundaries of sea and land. The resulting ‘Knott’s equations’ remain fundamental to the modern science of reflection seismology.