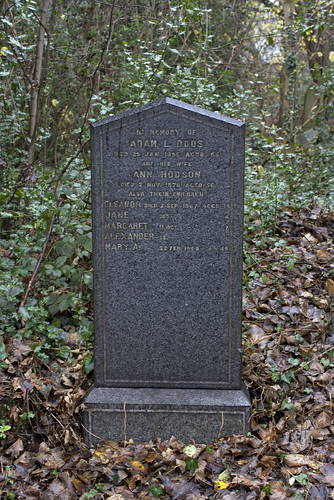 How illness devastated a Victorian family

In 1867 Adam and his family lived at the Edinburgh Artillery Militia Barracks off Easter Road where Adam was a Staff Sergeant. This was after the Crimean War when the militia had been mobilised to man coastal fortifications in Scotland while the Royal Artillery were on service overseas.

Nineteenth-century Edinburgh may have been the Athens of the North but deprivation and overcrowding in the Old Town encouraged diseases like cholera, scarlet fever, typhus and typhoid. The figures revealed by the 1861 census, together with the collapse of the Heave Awa Hoose in the Royal Mile, led to a public outcry and the Edinburgh Improvement Act of 1867 initiated the replacement of many old slums and, more importantly, the provision of clean water.

Adam's family may have fared better than many in their barracks housing with access to medical care. But Dr Charles Dyce could do no more than certify the deaths of the Dods children. On 21 August 1867 Eleanor fell ill. A high fever, headache and muscle and joint pain were accompanied by a rash and sensitivity to light. The symptoms were diagnosed as the Irish fever - typhus, possibly contracted from lice. Delirium followed and Eleanor died two weeks later at the age of 15.

Twelve days later her little sister, Jane, fell sick and after another sixteen days she too died. Two weeks after that Margaret and Alexander Dods died, just days apart. Each of the children's deaths was registered by Adam Dods

By the time of his own death in January 1886, Adam had retired from the militia and was living on his army pension at 29 East London Street. His death was registered by his son J. A. Dods.