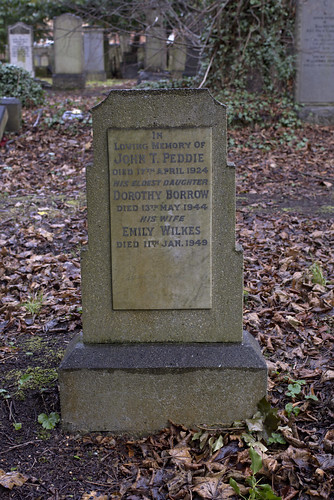 The only woman listed amongst the war dead in Newington Cemetery, having served in the women's armed forces in both WW1 and WW2

World War I brought new opportunities for women in the workplace and the armed forces, although only in a non-combatant role. In February 1917 the War Office set up the Women's Army Auxiliary Corps (WAAC), later renamed as Queen Mary's Army Auxiliary Corps (QMAAC). Fire bombing in WW2 destroyed many military records, but Dorothy Peddie’s medal record shows that she served in QMAAC and was awarded the British and Victory medals for service in a theatre of war. Her rank was Assistant Administrator. QMAAC servicewomen wore the same khaki uniform as male soldiers, with a small cap, jacket and skirt no more than 12 inches above the ground.

When Dorothy's father died at home in East Mayfield, aged 63, in 1924, her mother paid £12 for the family lair. By then Dorothy had married Ernest James Borrow, a stage and film actor and latterly a theatrical producer. By 1935 they were based in London. As far as is known they had no children.

As WW2 loomed the Auxiliary Territorial Service (ATS) was formed in September 1938, drawing its roots from the WAAC and QMAAC of WW1. On national registration day, 29th September 1939, Ernest was at his Willesden home with another actor but Dorothy was at a military unit near Ashford in Kent. Her birth year has been adjusted to 1898, perhaps to avoid the age limit of 43 then in force for the ATS. By 4th September 1940 she was an ATS officer with the rank of Company Assistant, later renamed 2nd Subaltern. On February 5th 1942 she was promoted to Junior Commander (= male army Captain), the rank she held until her death on May 13th 1944, aged 51. She died in Nottingham City Hospital from complications after appendicitis.

A death notice in the Scotsman of 16th May 1944 announced: At Nottingham on 13th May 1944, Dorrie, the wife of Ernest James Borrow, London and the daughter of the late John T. Peddie and Mrs Peddie of 13 Saughtonhall Terrace. Funeral at Newington Cemetery.