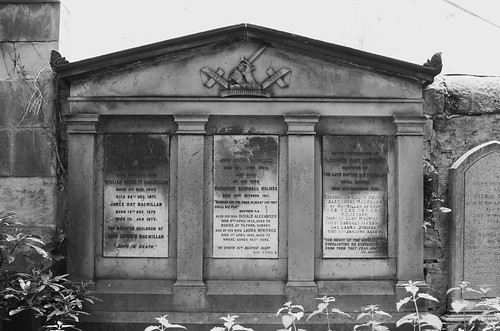 Distinguished military career - KCB, KCVO, CBE, DSO, MC(2 Bars) He was born in India, and his father was a coffee plantation owner. However, when he was 3 years old, his parents, returned to Britain to bring up their only son.

Gordon Holmes MacMillan was commissioned from Sandhurst in 1915 and posted to the Argyll and Sutherland Highlanders (A&SH).

He served in both world wars, rising to the rank of General in 1952 and retired from the Army 1955. His career included overseeing the British troops in Palestine and Transjordan up to the establishment of the State of Israel, a period as Governor of Edinburgh Castle and GOC Scotland, at which appointment he was found to be the Chief of the Clan MacMillan, and as Governor and Commander in Chief of the City and Garrison of Gibraltar.

Following his retirement in 1955 he was appointed Vice Lieutenant for the County of Renfrew. He died 1986, as a result of a motor accident.