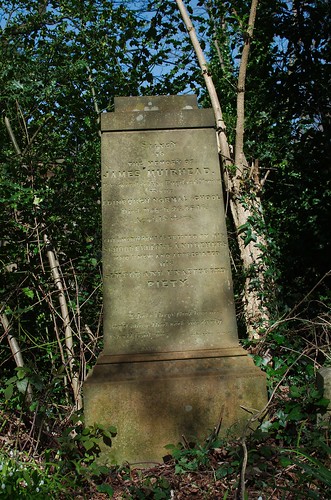 James Muirhead died at 53 Clerk Street, Edinburgh of scrofula on 26th March 1846 age 15 years, 9 months and 12 days, the eldest child of Andrew Muirhead and Beathen (Scott), who married in Barony, Glasgow in 1827. Andrew Muirhead was a bookseller and tea dealer at 53 Clerk Street at the time of James’s death. Scrofula is tuberculosis of the lymph nodes in the neck, which was once a common disorder often then caused by drinking contaminated milk, leaving visible abcess scars on the neck. In the Middle Ages it was also known as the King’s Evil as it was believed that a touch from royalty could cure what were thought to be skin diseases.

James was a pupil and monitor in Edinburgh Normal School and the headstone was provided by schoolfellows and others. A monitor was a senior pupil in a school with special duties such as keeping order and sometimes teaching the younger ones, but it was also a training system then in use for producing school teachers and a Normal School was one specifically directed to this end. After the 1843 Disruption many teachers in church schools joined the Free Church including the Superintendent of the Edinburgh Normal School with nearly all the pupils. At first the school was in Carruber’s Close off the High Street, then in rooms under the Music Hall entered off Rose Street. From October 1846 the Free Church acquired Moray House in the Canongate, to establish teacher training with links to the present day as part of Edinburgh University.

On March 29th 1846 the funeral procession of James Muirhead went from 53 Clerk Street to Newington Cemetery, then known as Newington Necropolis. By the 1851 census the rest of the family were at 29 Nicolson Street and in April 1852 they all emigrated to USA via New York.

To the left is a taller more ornate early memorial with a “fouled anchor” carving on the top “In memory of Duncan Menzies Commander Royal Navy who died 22nd December 1846 age 88 years, his wife Elizabeth died 20th October 1849 age 80 years, daughters Elizabeth and Mary died at Elora Ontario, who executed this stone, the former on 19th April 1892 age 83 and the latter for 37 years the wife of Rev. James Middlemiss died 29 June 1892 age 79”. For 2 years when he was 16 to 18 James Middlemiss was a private tutor to James Clerk Maxwell when he was 8 to 10 years old.