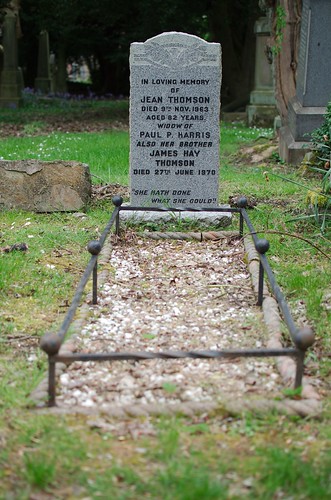 Wife of Rotary Club founder Paul Harris. Born in Comely Bank, Edinburgh. The grave is visited by Rotarians from across the world.

Harris met Jean Thomson, Scottish-born daughter of John and Ann Younson Thomson, during an outdoor excursion of what would later become the Prairie Club. "One beautiful March Saturday in 1910 I joined my fellow Prairians on an Elgin and Aurora electric train bound west. I was a bachelor and quite open-minded on the matrimonial subject. That is to say, I had never closed my mind and heart to the possibilities of conjugal bliss ...Here is where she came in, blythe, bonny Jean."

They married on 2 July 1910 in Chicago. In 1912 they purchased a house on Longwood Drive in Morgan Park, a suburb of Chicago, and named it Comely Bank, after the area in Edinburgh where Jean had lived as a child. The couple had no children and Jean joined Harris on his visits to Rotary clubs around the world. After Harris died, Jean briefly continued to live at Comely Bank. She later sold the house and returned to her native Edinburgh, where she died in 1963.