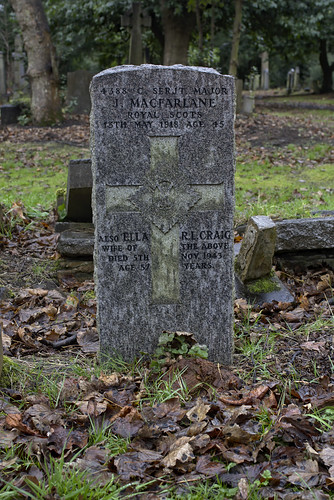 An example of a Commonwealth War Graves Commission headstone, one of 75 in Newington Cemetery

Company Sergeant Major John Macfarlane of the Royal Scots is credited with 28 years of army service. During a varied career he was an instructor with the British Honduras Mounted Rifles and the West African Frontier Forces.

In 1913 he married Ella Roberta Lamont Craig. This must have been during a break from army service as his occupation is given as Government Messenger. He seems to have re-enlisted following the outbreak of WW1 as he is recorded as serving with the 13th New Army Service Battalion of the Royal Scots, a battalion formed in Edinburgh in September 1914. CSM Macfarlane went with the battalion to France in July 1915.

He died of heart failure, aged 45, on 13th May 1918 while serving with the 3rd (Reserve) Battalion of the Royal Scots. At the time the battalion was stationed at Mullingar in Ireland but CSM Macfarlane was based at the School of Musketry, Madras College, St Andrews and died in hospital in St Andrews.

After his death Ella Macfarlane remained at their home at 6 Roseneath Terrace, Edinburgh, until her own death in 1943 aged 57.

Unusually, as well as the usual service inscription, this headstone records “Also Ella R. L. Craig wife of the above who died 5th November 1943”. If the family held the lairage of this plot this would explain her interment in the same grave. This addition to a CWGC headstone would have been permitted as long as it complied with the rules (including not exceeding 66 characters) and was privately paid for.