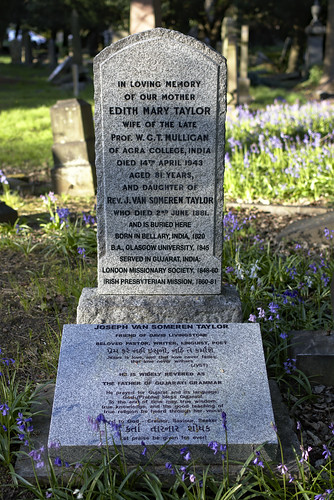 Missionary and friend of David Livingstone, known as the "Father of Gujarati grammar"

The son of London Missionary Society pioneers in Karnataka in south India, Taylor grew up speaking Kannada, Marathi and Tamil. After school in Kolkata (Calcutta) he came to Britain for further education, becoming a life-long friend of David Livingstone. After graduating from Glasgow University and being ordained as a minister in 1845 he returned to India and was appointed to Gujarat in 1848.

The LMS withdrew from Gujarat in 1860 but Taylor stayed on with the Irish Presbyterian Mission. A warm-hearted scholarly communicator of the Christian faith, he made friends among the Hindu, Muslim and Parsi communities, including the poet Kavi Dalpatram and the social reformer Behramji Malabari.

He contributed to the scholarly 1861 revision of the earlier Gujarati Bible and in 1867 produced his famous Gujarati Vyakaran (grammar). His Gujarati hymns are full of the rich language of Indian spirituality. He was married twice, to Eliza Mary Pritchard (1847) and Georgina Brodie (1859): both his wives were Scottish. He died, on leave in Edinburgh, in 1881. A son, Dr Lechmere Taylor, became Director of the Edinburgh Medical Missionary Society; a daughter, Edith Mary (Mulligan), is buried here.