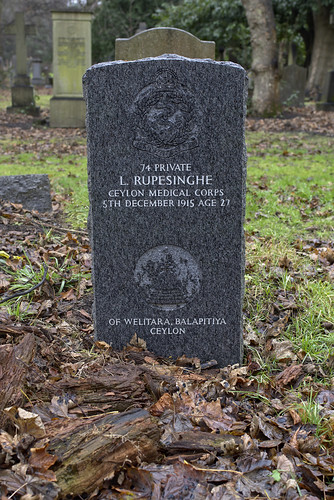 A Sri Lankan volunteer medic in World War I

At the time of his death Louis Rupesinghe was a medical student enrolled in 74 Ceylon Medical Corps. His death certificate records that he died of pneumonia in the Royal Infirmary and that his ‘usual residence’ was at 27 Queens Crescent, Edinburgh.

The Commonwealth War Graves Commission grave registration report identifies the lair owner as Leonard P. Samavasinka. There is some doubt about Louis's year of birth: his age appears variously as 25 and 27 in the records.

His father's name is recorded by the CWGC as Sadoris Rupesinghe Karunatilaka of Veda Aratchi, Welitara, Weliwatta, Balapitiya, Ceylon. According to the death certificate he was still alive at the time of his son's death while Louis's mother was deceased. His father is recorded as a plumbago merchant. Plumbago is the old term for graphite, a mineral of high industrial value which was one of Sri Lanka's main exports. So Louis's father was probably prosperous, maybe a mine-owner. (Confusingly, Sri Lanka is also a leading source of the flowering plant named plumbago.)

The symbol on the gravestone is a dagoba, the Sinhalese name for the Buddhist stupa, a dome-shaped shrine containing relics of the Buddha or a Buddhist saint.