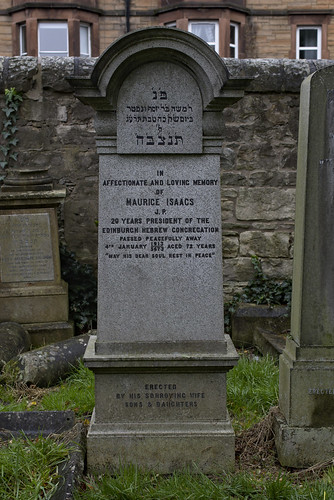 A native of Edinburgh, Maurice Isaacs made his fortune in the clothing business. He was one of a handful of members of the city's Jewish community who rose from a modest background to achieve economic success as owner of the clothing company B. Hyam & Co. which had stores in London, Edinburgh, Belfast and Dublin. As President of the Edinburgh Hebrew Congregation Isaacs was instrumental in the refurbishment of the Graham Street Synagogue in the late 1890s.

A great philanthropist in the Jewish community, he also acted as Chairman of the Simon Street Soup Kitchen which provided for all poor in the city irrespective of their cultural background. Leaders of Edinburgh’s Jewish community often also served in key functions in the city: Maurice Isaacs was a member of the Merchants Association and a Justice of the Peace.

Maurice Isaacs was married to Melanie Frank (1833-1915) with whom he had four children, three sons and one daughter.