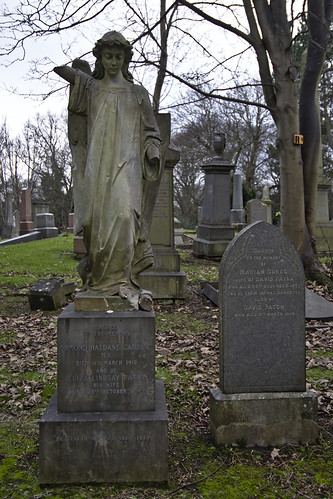 A 'fallen angel' restored on the grave of Ormond Haldane Garland

Ormond Haldane Garland was born on 27th May 1846 in South Leith, the son of Jacob Armond Garland and his wife Margaret Bell Haldane. His father Jacob was a magistrate and pawnbroker. Several members of the Garland family have been traced living in various parts of Leith.

Ormond studied to become a doctor and his medical practice was based in 35 Charlotte Street, Leith. On 15th April 1873 Ormond married Eliza Lindsay Paton, daughter of Hugh and Jane Paton, her father being described as Her Majesty’s Carver and Gilder.

His grave was marked by the statue of an angel which, like so many monuments in the cemetery, eventually fell victim to time and neglect. Found face down in the mud, in a prominent position at the heart of the cemetery, the statue was nicknamed the ‘fallen angel’ by volunteer working parties who recognised it as an ideal subject for restoration.

Thanks to a local community grant awarded through the South Central Neighbourhood Partnership the Friends of Newington Cemetery were able to have this beautiful statue professionally restored in 2016.