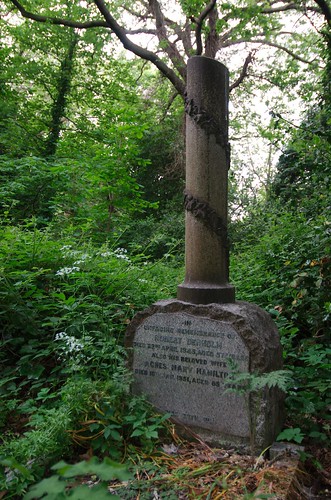 Robert Denholm's gravestone reflects the changing style of headstones. The column has been deliberately broken off to signify a life cut short.

Robert Denholm, a Florist and Fruiterer, was 57 when he died of stomach cancer. His wife Agnes died six years later. Their headstone is striking, and one of four “broken columns” in the graveyard.

Two are much simpler, while the third has carved ivy entwined around it like this one. In cemetery symbolism ivy denotes friendship, fidelity and immortality.The memorial contrasts with the surrounding late 19th century obelisks and square- pillars-with-urns. It is probable that the design was selected from a mason’s pattern book.