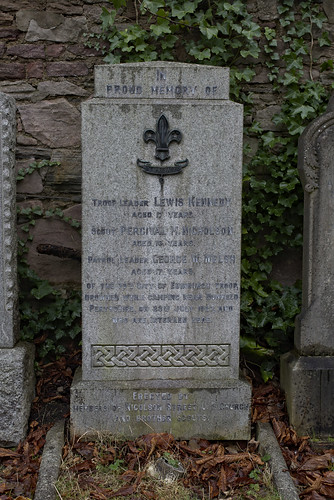 The three 17-year-olds were tragically drowned in the River Tay near Dunkeld while attending Scout camp. The boys had permission to swim, but the current was stronger than normal, and the water dirtier as a result of soil washed down from upstream, and the boys got into difficulties. Despite the best endeavours of their Scoutmaster, who had been keeping watch on the river bank, and two members of the Boys’ Brigade who were also camping nearby, the boys disappeared underwater and their bodies were later recovered by police.

Extraordinary scenes were witnessed at the funeral, with many thousands lining the route from Nicolson Street United Free Church, where a memorial service was held, to Newington Cemetery. The funeral procession, headed by a parade of Scouts and Guides, included five motor cars full of wreaths.

The three friends and comrades were laid to rest in a single grave.