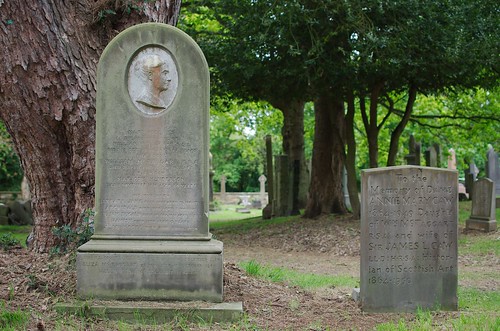 William McTaggart is acclaimed as one of Scotland's finest painters, specialising in sea and skyscapes inspired by his childhood in Kintyre (Argyll), and subsequent frequent visits there.

William McTaggart was born to crofting parents. His talent was recognised early and when sixteen he moved to Glasgow, then Edinburgh, where he enrolled at the Trustees Academy. In 1859 while still a student he was elected an associate of the Royal Scottish Academy.

He married Mary Holmes in 1863. She died in 1884 and he then married Marjorie Henderson, daughter of another well-known painter Joseph Henderson. Both wives are commemorated on the gravestone.

In May 1889 he moved to Dean Park, Broomieknowe, on the outskirts of Lasswade, Midlothian, and built himself a studio in the garden. He painted there until his death in 1910.

His biography was written by his son- in-law James Caw, artist, art historian and the first director of both the National Gallery of Scotland and the Portrait Gallery. In 1909, James Caw married McTaggart's daughter Anne (Annie) Caw (1864–1949). Both James and Annie are buried next to her father.